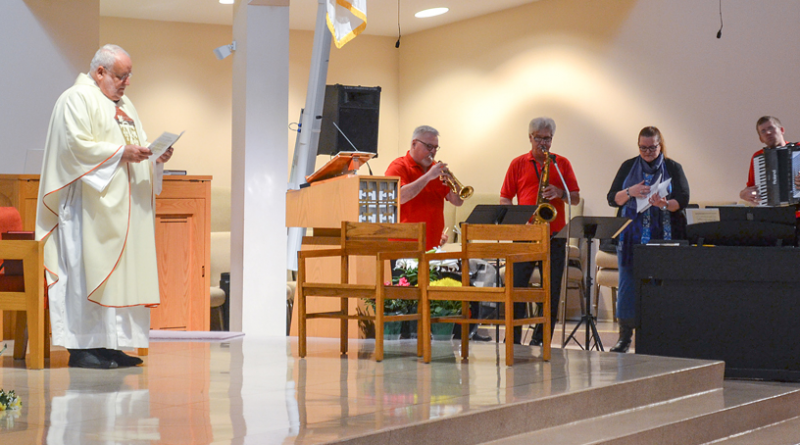 After Communion during the Vigil Mass at St. Joseph Church in Herndon April 7, the musicians played a slow traditional hymn to the Blessed Mother. But one thing was different than any other Saturday: the lyrics of the hymn were in Polish and the singers were accompanied by an accordion, trombone, and drums for a polka Mass.

After the Lenny Adams Band played an upbeat devotional tune for the entrance procession, Franciscan Father Thomas Bourque, pastor, noted that it was Divine Mercy Sunday, a feast inspired by apparitions to St. Faustina Kowalksa, a Polish nun, and established by Pope John Paul II. After Mass, the band played at a sold-out Polish dinner and dance sponsored by the Knights of Columbus Good Samaritan Council.

Father Bourque said that while his background is French-Canadian, he had fond memories of celebrating Masses at polka conventions in Pennsylvania years ago. He hoped to show parishioners “a different expression of music and spirituality” with the polka Mass, in the same way as when mariachis performed for the feast of Our Lady of Guadalupe in December and once, a Creole choir sang at a wedding for a couple from Louisiana.

“My hope is that they deepen their respect for all ethnic backgrounds and people of diversity. We all pray to the one God, we all have a liturgy that’s approved with the Roman missal, with the universal church, but our expression of that is so different because of our cultural background,” Father Bourque said.

Polka Masses are most common in the Midwest and other areas of the US, with vibrant Czech, Slovak, German, and Polish communities.

Father George Balasko of Holy Rosary Church in Lowellville, Ohio, is recognized by the Polka Hall of Fame in Ohio as the “creator of the Polka Mass.” A polka musician himself, “Father Balasko reworked the beloved melodies of his youth with English lyrics that appealed to church-goers of all nationalities,” the Hall of Fame’s website says. “Accompanied by the Bobby Timko Orchestra, he celebrated the very first Polka Mass, Memorial Day, 1972, at Holy Rosary Church in Lowellville, Ohio.”

The popularity of polka Masses grew within a few years, due to the influence of Father Frank Perkovich, a Minnesota pastor whose polka Mass recordings have sold more than 100,000 copies. Though some critics said that secular music, even paired with religious lyrics, did not belong in church, polka Masses were a hit at ethnic festivals and many parishes. The height of the polka Mass’ fame may have been in 1983, when Father Perkovich, accompanied by 80 pilgrims from the Midwest, celebrated a polka Mass in St. Peter’s Basilica. “We’ll polka our way to heaven,” he said at the time, according to an Associated Press report. Days later, he performed for Pope John Paul II at a general audience. Father Perkovich was later inducted into the Polka Hall of Fame.

For Irene Brooks, a parishioner of Our Lady of Hope Church in Potomac Falls, attending the Polka Mass at St. Joseph was a trip down memory lane. Her parents, like many Polish-Americans, loved polka music.

“It’s kind of nice to bring back memories of my mom and dad,” said Brooks, before heading off to a dinner of halupkis, pierogis, and kielbasa. “It makes me feel closer to them.” 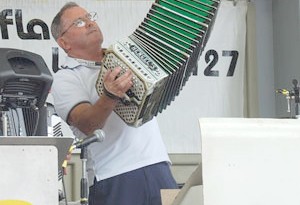 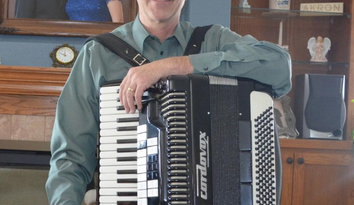